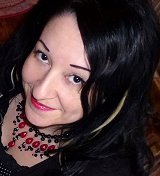 I am a Greek child who was born and raised in Germany, where I met my American husband and we now live in England.

I am an artist by nature. Even as a child I was interested in art and fashion. I was drawing and painting and fortunately had access to a broad range of beautiful materials (my mother was a tailor among many other things). I wanted to become a fashion designer, but an opportunity was presented to get a rare apprenticeship in a furrier school, and I was encouraged to take it so that I could learn a broader range of skills.

Twice during my apprenticeship, designs that I had created and sewn were entered into competitions and out of hundreds of competitors were selected to be shown on the catwalk at the Frankfurt Fashion Expo. I spent three years in apprenticeship and two years working in a tailoring environment where I was responsible for redesigning and reworking vintage fur coats.

Eventually I decided to become self-employed, and having become very passionate about jewellery, I began changing my focus. Initially I bought and sold jewellery while learning how to craft my own. Over time, I included more and more of my own work until I now sell only my own creations.

I began creating jewellery that matched the environment that I was quite passionate about, namely the medieval period (I was actively selling items at my own stall at medieval markets in Germany). Over time, the style of jewellery has changed and today I am producing primarily contemporary pieces, which I greatly enjoy designing and making.

I have always had an interest in crystals and minerals. I was curious about the various energies associated with the stones, which led me down the path of natural healing. During the period that I was learning my craft, I was also engaged in becoming a healing practitioner, which included learning about Bach flower remedies, Reiki, autogenic therapy, and other related holistic therapy methods. I eventually became a Reiki master and teacher.

The move to England left a hole where our medieval market experiences lived and we eventually filled it with children, a lot of good friends, gardening and by engaging in period dancing, which we enjoy very much.